A Flowering Afternoon Tea at the Park Lane Hotel A Flowering Afternoon Tea at the Park Lane Hotel

Our guest reporter Sofie Birkin samples the ‘Flowering’ Afternoon Tea at the Park Lane Hotel, Mayfair, created in celebration of the 100th anniversary of the Chelsea Flower Show…

After tentatively entering the imposing foyer of the Park Lane Hotel, I was led through to the Palm Court, immediately impressed by the towering ceilings and Art Deco furnishings. Everything was exceptionally formal (I will never get used to someone putting a napkin on my lap) and our waiter was charmingly polite.  The tea started with champagne dyed pink with the addition of a single hibiscus flower (edible!) while we chose our tea- whole rosebud tea which tasted like Turkish Delight without the Ice Queen connotations, and Flowering Osmanthus- flowering green tea tied around Osmanthus blossoms, which is placed in a glass teapot and blooms in the hot water like a cross between a flower and an anemone.

The resident harpist who had been setting up began to play, popular music (‘Hopelessly Devoted To You, for example) rendered almost unrecognisable by the angelic sound of the harp, creating a sort of game for us (“What is it…I think it’s…is it Sherlo- no wait I know, it’s the Game of Thrones theme!” “Yeah- no, wait, it’s-“ “The Lord Of The Rings Music!”).  Tea was followed by an array of delicate floral-themed sandwiches, such as poached Scottish salmon, cucumber and fennel crème fraiche served on a mini muffin with cucumber flowers and orange blossom honey, wholegrain mustard roast ham, candied tomatoes and watercress on white bread. Next up were the obligatory scones, hot, fluffy, moreish beasts with amazing lemon verbena curd, clotted cream and rhubarb and raspberry jam.  We were getting full by this point so it was with mixed excitement and wary anticipation that we received the horticultural inspired floral pastries, but it was absolutely worth the incredible bloat that followed.  The epic voyage through the sea of tiny cakes included a chocolate hanging basket with spiced Chai tea mousse and chocolate soil, a rosewater and raspberry mousse with crystallised rose petals on a rose macaroon, and an entire chocolate mushroom topped with a tiny icing gnome, which we didn’t have the heart to eat.

After thanking our waiter and making off with the tiny watering can and spade that accompanied the pastries, we went and had a much needed lie down amongst the real flowers in St James Park, opposite the hotel.  The experience is extravagant, certainly, but if you can afford it (£45 per person), this has to be one of the most enjoyable and unusual teas to be found in London. 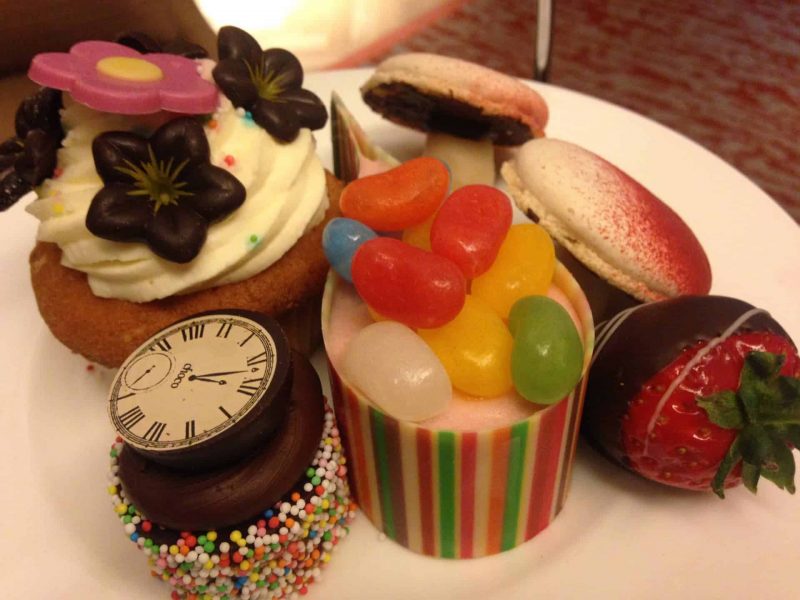