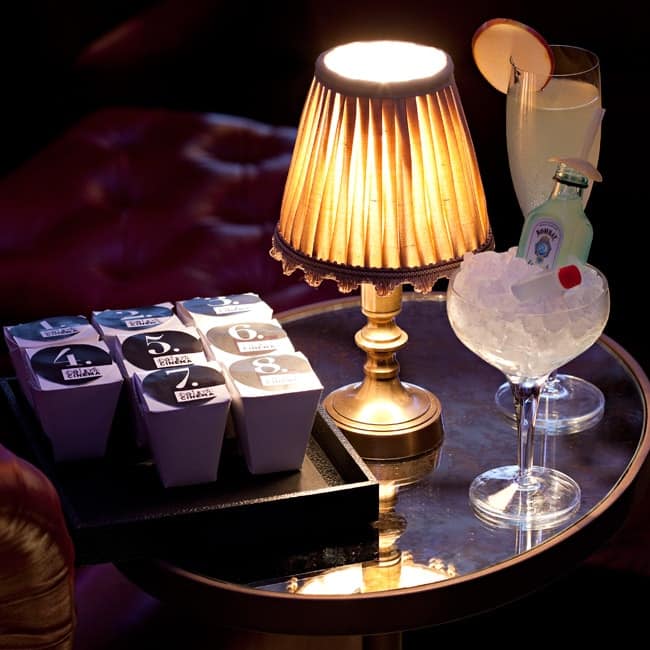 If you think Edible Cinema sounds weird, you’d be right. It’s wonderfully, gloriously, hilariously weird – a true multi-sensory experience in which an audience of film lovers are invited to immerse themselves in cult movies through the wonders of sight, sound, smell, touch and taste.

The idea of Edible Cinema is simple – morsels of carefully chosen food are painstakingly prepared and administered to cinema-goers at particular points in the film they’ve chosen to come and watch. Organisers hope viewers will feel connected with on-screen characters in ways they’ve never been before, and it’s not a mere case of the lead actor eating a hamburger, so you do too. Clever, complex concoctions work together to evoke the textures, emotions and even temperatures felt by the characters at certain points in the film – and if you let yourself, you’ll really feel like you’re right there with them.

From the moment I arrived at the newly refurbished Electric Cinema in Notting Hill, a sense of excitement and anticipation was palpable. Not knowing what to expect is half the fun, especially if you’ve never seen the film that’s showing. I went along to see Bruce Robinson’s Withnail & I for the first time – countless people had expressed dismay that I’d not found time to watch it in my 22 (busy!) years on earth, so this seemed like the perfect opportunity.

Withnail & I being a heady tale of substance abuse and outrageous boozing, the contents of the numbered boxes placed by my plush reclining armchair (complete with cashmere blanket!) were sure to be intoxicating. The evening began with a welcoming tipple, the “With Bombay Sapphire I ‘Nailed It'” – an eye-popping mixture of Bombay Sapphire, Grand Marnier, orange juice and Martini Prosecco.

As soon as the lights dimmed, hush descended on the audience – a buzz filled the air as we anticipated opening our first boxes – but first, an opening skit starring an unexpected host of familiar faces – James Corden, Nigella Lawson and Michael McIntyre (to name a few) popped up to remind us to turn our phones off and refrain from chatting. A brilliant touch, adding celebrity endorsement to the concept without over-egging the pudding.

The first opportunity to open a box came about ten minutes in – drug-addled Withnail, desperate to keep warm in his rat-infested, freezing flat, resorts to covering himself in Deep Heat. A bright ‘1’ flashes either side of the screen – which means, surely not – it’s time to eat something. That tastes like Deep Heat. We are horrified, but intrigued. Sure enough, we’re instructed to  squeeze a searing mixture of bergamot, bitters, bay, honey and lemon onto our tongues from a tube. It’s disgusting, of course – but it takes you directly to Withnail’s pathetic, afflictive state of existence, held together with pharmaceuticals and amphetamines.

Next up, ‘Lighter Fluid’, designed to mirror the strength of the drinks taken by Withnail and his loyal sidekick in their local boozer. Bombay Sapphire, Creme De Peche and lemon juice do the trick nicely – but I couldn’t down it with quite the zeal Withnail does. Later, ‘Perfumed Ponce’ emanates a stench so potent I can barely stand it – exactly the reaction intended by the mixologist, evoking a homophobic man’s outrage at the notion Withnail’s sidekick could be gay after sniffing his flowery cologne.

Perhaps most terrifying was the scene involving Withnail’s struggle to cook a raw chicken – they couldn’t subject us to this… could they? At the risk of giving everyone salmonella, not quite – but we did try a charcoal crostini, with smoked, whipped chicken fat, skin and Melilot when instructed. It was interesting, to say the least… definitely not for the faint hearted!

Our favourite titbit consisted of smoked eel and trout terrine, with a malt shot. Administered when Withnail declares, after days stuck in the damp countryside without proper food, “I want something’s flesh!” This stole the show – the timing was brilliant, the flavours excellent. We’d started getting tired of vegetables, too…

Finishing off with tasters of caramel apple whiskey cake and rosemary, sea salt and white chocolate ganache, we couldn’t have enjoyed this experience more. This is the perfect night out for the film geek foodie in your life – and if that happens to be your partner, for £26 each there are double beds in the front row that allow for a borderline inappropriate amount of canoodling once the boxes are all empty.

It’s the sort of night out that’ll have you giggling in an ‘I-can’t-believe-I’m-doing-this-but-I’m definitely-enjoying-myself’ kind of way. Which I reckon is one of the best types of fun there is.