At New York Fashion Week, I was lucky enough to have access to the private star lounge – Mercedes Benz’s sponsored lounge – and have my hair styled by Tresemme, ahead of being on camera.

I also stayed at the stunning Park Central Hotel (just a few blocks down from Time Square), which felt very decadent with its gold ‘theatre-style’ draped curtains and black/white checkerboard floors.

As I headed to the Lincoln Centre (the location for NY Fashion Week) the following day I went straight to The Studio, a small intimate catwalk space where designer Nicole Miller was showing her collection.

Millers’ stylish and elegant reputation was upheld, with a bohemian-chic feel this season. Her collection featured lots of asymmetrical lines, colour blocking and large brimmed hats which were very reminiscent of the ‘70’s (a trend still going strong from last summer).

A palette of blue, grey, black, white and the occasional injection of burnt orange featured strongly in the collection. Miller has become a firm favourite with a mixture of celebrities including Beyonce Knowles, Susan Sarando and Eva Longoria, particularly when choosing that all important red carpet outfit.

Later on we headed to The Stage at The Lincoln Centre; with its stark white décor it was the setting for much-sought after womenswear designer Charlotte Ronson. Accompanied by a soundtrack from twin sister and DJ Samantha Ronson, her collection was rather more elegant and tailored than the grungy influences we’ve seen in previous years.

My favourite pieces included the chiffon tea dresses, which were teamed with elbow length leather gloves and pencil skirts. However, I was not overly keen on the fitted leather hoods, which reminded me a little of 1930’s driving helmets!

The collection embraced a mix of earthy tones – comprising of dark greens, burnt oranges, maroons and browns. It was extremely well received and when shyly appearing from backstage Ronson was offered hi-fives by the front row. Her artistically talented family also includes brother – musician and DJ Mark Ronson.

So that wraps up some of my highlights from New York Fashion Week, it turned out to be every bit the glossy and glamorous event that I’d anticipated. It also attracted an amazing crowd of people, who were more than happy to chat to me…which always helps! 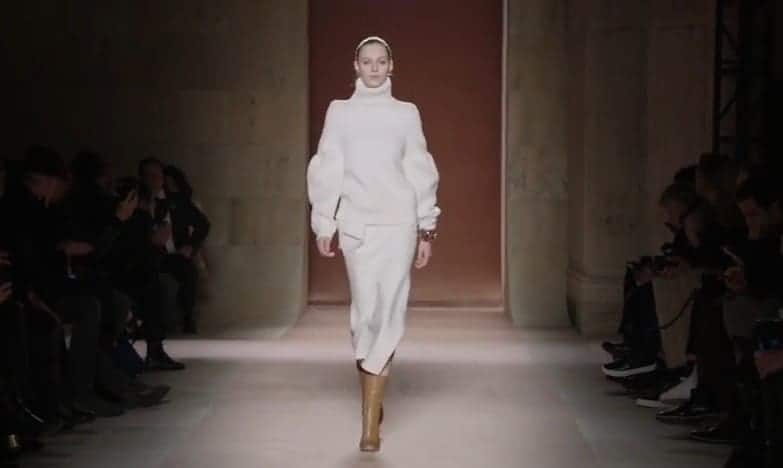 Fancy Some Sunday DIY? Try The Embellishment Trend At Home